Interview Robot FAQ – the Most Frequently Asked Questions About Tengai

More and more people are intrigued by our social and unbiased interview robot Tengai. And we’re getting a bunch of questions relating to it. So, in this blog post, we want to answers the 10 most frequently asked questions!

1. How do you ensure that the robot’s information gathering is unbiased?

Tengai conducts blind interviews, which means only recording candidates’ speech and then converting it into text in real-time. And a blind interview also means that she won’t take notice of other variables, such as a person’s accent or the pitch of their voice, their looks or gender. Furthermore, we don’t let Tengai know anything about the candidates before the interview. And the only thing we have access to is the candidates’ names and e-mail addresses. And we don’t use this information for the purpose of identifying specific candidates. That way we keep biases out of the interview.

2. Where did the idea behind Tengai originate?

The idea behind Tengai originally originated at Swedish recruitment and staffing agency TNG. And this is crucial because TNG is not just a regular agency, but has been specializing in unbiased, data-driven, structured and competency-based hiring over the last 15 years. And this is important because we want to ensure that Tengai’s diversity and inclusion software always is aiming to create an inclusive, fair and more transparent candidate experience, while also removing unconscious prejudices.

3. What is Furhat Robotics?

Furhat Robotics is a conversational AI and social robotics startup based in Stockholm, Sweden. And this is where the hardware and software operating system and tools to enable the growth of an ecosystem of applications for social robots, such as Tengai, are built.

In 2019, Tengai AB was incorporated but continues to work alongside Furhat Robotics, using the conversational platform and the operating system to develop the next generation of unbiased interview tools.

4. What and why do you teach the robot? Why do we need it?

Tengai is developed to mitigate unconscious bias in the interview process. So we are programming it to conduct situational- and skill-based interviews. By establishing a three-question pattern that is assessing soft skills and personality traits. The inclusion and diversity software Tengai has is unbiased by design and this is crucial to keep the process objective.  The programming was done by a diverse team of recruiters at TNG’s innovative lab TNGx and was initiated in 2018.

5. How is Tengai enhancing the candidate experience?

Our goal was to create a unique and enhanced candidate experience with Tengai.  And it was also very important for us to make sure that the interview experience is comfortable and exciting for the job seeker. So we worked extensively to understand what factors in a meeting between a human and a robot that will make the job seeker feel safe and comfortable. Therefore, we have incorporated ideas and suggestions from hundreds of test applicants and instructed Tengai to exercise “human” cues. These cues could be anything from nodding, leaning of the head or saying hmm.

By integrating Tengai in the recruitment process you are assuring a more fair and objective selection process. Our intention behind developing the AI-robot was never to replace human recruiters. But it is a recruitment tool that is complementing with data-driven insights. 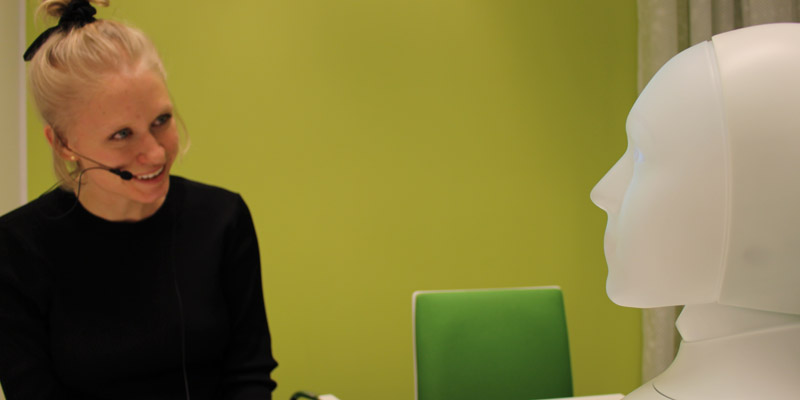 6. This is a new way to recruit. How has that affected you as recruitment professionals?

We’ve really had to look at ourselves to understand how we conduct interviews. Which movements, facial expressions, and words we use to confirm talent as humans and as candidates. We’ve gone to great lengths to analyze the questions that the robot should ask. It has been very important that the questions are as clear and as concrete as possible. Tengai struggles with ambiguity, so the less vagueness there is in a talent’s answer, the better Tengai is to evaluate and validate the skill sets.

7. Why would it be good for all recruiters to partake in this work?

All recruiters work old-school. And in a world where tech development goes faster by the day, we need to question old-school skills. It’s useful to evaluate yourself, the way you work on a daily basis and your interview technique. Even if we tend to think that we do a great job for our clients and candidates, there are always things that can be better. You just need to dare to challenge yourself. We need lifelong learnings even in the recruitment industry.

”As a human being, you need to take a step outside yourself and imagine yourself as a robot that hasn’t been gathering experiences since childhood.””

As we’ve taught Tengai social codes, we’ve become aware of how we behave in similar situations with people who we know and don’t know.

8. How advanced is Tengai’s communication?

There’s a lot of focus on providing and gathering information in recruitment. And this also applies to Tengai. Tengai is sharing information in a dialogue form about the interview, how it will be conducted, and then gathers the answers. And as she is collecting the information, she also is interpreting and understanding what the candidate is saying. This is regardless of the number of words and sentences used. So yes, it can handle open questions and open-ended answers.

If she doesn’t understand an answer, Tengai will inform the candidate, ask follow-up questions and subsequently attempts to continue the conversation and the interview.

9. How does a series of questions asked by Tengai differ from one asked by a human?

There’s no capacity for extra words or narrative that isn’t directly linked to a question that Tengai has asked. Tengai asks all questions in exactly the same way, in the same tone and typically in the same order. That way it is a more fair and objective interview. A hiring manager would deviate from this formula, adjusting to candidates’ responses and thereby extracting more from them which makes the process unfair. Additionally, humans are also influenced and affected by unconscious bias. And therefore both the candidates and recruiters are subject to preconceptions and subjective interpretations. But you are lowering the chance of this by utilizing Tengai!

“The great advantage is that we’re able to get more candidates involved in the process.”

10. What is the greatest advantage of Tengai?

We are getting a more objective and structured process and we avoid the unconscious bias we all have. By doing this in the early selection, we shift the subjectivity further along the process (where it is less damaging). Additionally, we’re able to invite more candidates to participate in the recruitment processes’ early stages, allowing for greater diversity by ensuring a better and broader selection of talents.

What we can risk losing is the detail and personalization that can give a complete picture of a candidate’s suitability for a position. On the other hand, Tengai is designed to assist and make the selection process more data-driven. The in-depth assessment will still be done by an experienced recruiter trained in unbiased recruitment. In addition, Tengai is enhancing the candidate experience. And this is making your brand more credible and attractive to job seekers.